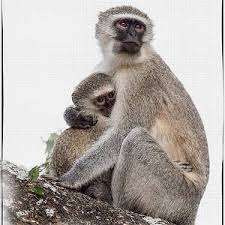 You might be wondering, what on earth an article about vervet monkeys has to do with Reiki.  Recently, a male vervet monkey repeatedly helped himself to cereals from the kitchen cupboard.   He had an open wound on his head and an injured foot.  He at no time, displayed any aggressive behaviour.  Being an animal lover, I was very concerned about him, not wanting to encourage his behaviour, but understanding that he was vulnerable, always on his own and injured.  Not knowing much about the behaviour of vervets, I went onto The Monkey Helpline site and gained a wealth of knowledge.  The monkey came back to the house a number of times and I was careful never to hand him food, but left some fruit where he could easily get it.  I only did this after getting information from the Monkey Helpline site.  On one of the days when he visited, the dogs were around and I was concerned that they would get to him and I encouraged him to move away – it was almost as though he understood.  I was delighted to see a few days later that his head wound had healed.  He hasn’t been around for the last few days and I am hoping he has found a new troop – details in my article on my blog, see link below.

What this experience has taught me is to always be well-informed, understand a situation before you judge it, take appropriate action and always be kind.

Vervet monkeys are amongst the most misunderstood and persecuted animals in South Africa, particularly in KwaZulu-Natal, where they are found in great numbers.  They are protected in terms of both national and provincial conservation legislation and also in terms of national animal protection legislation, and injuring or killing them is an offence!

Vervet monkeys are NOT classified as “vermin”.

Pellet guns and catapults are a scourge – vervets shot with pellets rarely die instantly.  Instead the pellets cause injuries that result in a slow and agonizing death over days and weeks.  Stones, steel or lead balls, marbles, etc., shot at monkeys with a catapult, cause severe and life-threatening injuries such as smashed eyes and broken bones.  Shooting at monkeys with paintball guns can result in serious and even lethal injuries – It is illegal and very cruel – DON’T DO IT!

An adult male monkey on his own, is in all likelihood a dispersing male.  Once a male monkey reaches sexual maturity, at about 5 years, he is evicted from his birth troop.  He either leaves without any negative interaction, or he may sustain serious injury in his bid to remain in the troop.  His eviction or departure from his troop and territory, is to ensure he does not mate with his siblings and does not compete with the other adult males that keep the gene pool pure.  The evicted male then has to move on and find a new troop with which he can integrate.

He faces many obstacles and challenges in doing so.  He is on his own and no longer has the safety and comfort of his troop.  He has to negotiate unknown territory.  If he survives and is able to join a new troop, he can go on to live a few more years under the protection of that troop and alongside the troop leader.

Single dispersing adult male monkeys are not aggressive, they are no threat to people or pets and are not ‘problematic bulls’.  A young evicted male monkey may often remain close to human habitation and even enjoy the company of people.  He is of course, just a lonely, scared young adult.

If you do not wish to have this male in and around your home and garden, you can encourage him to move along by chasing him with a jet of water squirted from a bottle, water pistol or hose pipe.

If he is not a problem to you, just leave him to move off at his own pace and allow him to remain in a safe area until he is ready to continue on his way naturally.  This is what will happen, provided you act appropriately

What must always be noted and remembered, is that humans have encroached on their natural habitat.  A troop of monkeys is bonded to its territory through a matrilineal line, spanning many generations.  Female vervets never leave the territory of their birth, which means that with the exception of most of the mature adult males, the monkeys you see in the troop where you live, descend from female monkeys that have lived in the area for hundreds of years.  Even though humans have destroyed their habitat and their homes, they are bound to the area in which they were born.

When the houses, factories, schools, shops and roads were constructed on land cleared of the natural vegetation that was home to the monkeys, they had to learn to survive in a ‘monkey unfriendly’ world, and have become demonised, harassed, persecuted and killed.

It is important to know that monkeys do NOT carry rabies, nor do they randomly attack and bite people or pets.

There has never been a recorded case of a rabid vervet.  This can be confirmed by the State Vet.  They do NOT transmit disease.  Fears that vervets are carriers of rabies or other infectious diseases that can be transmitted to humans, are unfounded.   Fear has been fueled by some uninformed vets and human doctors alike, that free-ranging vervet monkeys are “rabies carriers” – this is incorrect, vervet monkeys are NOT rabies carriers.

Contrary to belief, vervet monkeys are NOT breeding out of control and there is no population explosion.  They do not attack people or pets.  Vervets will threaten any person or other animal they regard as an immediate threat to their safety, or to that of a fellow troop member.  The so-called threatening behaviour, is an attempt to ward off a possible aggressor.  Vervets do not attack, but they will bite in self-defense if they are attacked or seriously provoked.  Concern that vervets will bite children who encounter them in the garden or home, are unfounded.

If Vervets visiting your property are a problem to you, make every effort not to leave any food around that will encourage their presence and make them less cautious of humans.  This applies both inside and outside your home.

The only people ever likely to be bitten by a vervet are those who provoke, tease or attempt to catch them.   If you do not interfere with vervets, you will NOT be bitten.

In almost every case where a dog has been bitten by a vervet, this has happened because the dog has attacked the vervet.  Dogs should never be trained or encouraged to arm the monkeys.  The monkeys are no threat to them.  It is our ignorance that has led to our inappropriate and sometimes cruel behaviour towards them.

For information on how to deal with any unwanted vervet presence, please visit the Monkey Helpline

Want to join the discussion?
Feel free to contribute!

Eat Healthily and Save the Planet
Scroll to top

This site uses cookies. By continuing to browse the site, you are agreeing to our use of cookies.

We may request cookies to be set on your device. We use cookies to let us know when you visit our websites, how you interact with us, to enrich your user experience, and to customize your relationship with our website.

Click on the different category headings to find out more. You can also change some of your preferences. Note that blocking some types of cookies may impact your experience on our websites and the services we are able to offer.

These cookies are strictly necessary to provide you with services available through our website and to use some of its features.

Because these cookies are strictly necessary to deliver the website, you cannot refuse them without impacting how our site functions. You can block or delete them by changing your browser settings and force blocking all cookies on this website.

We also use different external services like Google Webfonts, Google Maps and external Video providers. Since these providers may collect personal data like your IP address we allow you to block them here. Please be aware that this might heavily reduce the functionality and appearance of our site. Changes will take effect once you reload the page.